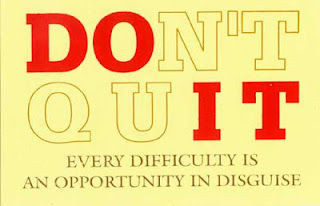 You Have Come Too Far To Turn Back Now

“Jesus said to him, "You are not far from the kingdom of God." (Mark 12:34).
One of the greatest things about God is that He continues to work with men and women despite their own limitations and failings.  Too often they do not allow God to complete what He starts within them.  The Lord Jesus wants to finish what He has started in you.  “He who has begun a good work in you will complete it until the day of Jesus Christ”  (Philippians 1:6).
Family background is not a reliable indicator of accomplishment.  High percentages of great men and women have come from broken homes.  Neither is wealth an accurate indicator of success or poverty a guarantee of low achievement.  Opportunity is a very peculiar thing.  Two people with the similar gifts, talents, and resources can look at a situation, and one person will see tremendous opportunity while the other sees nothing.
To often people allow their circumstances to stop the Lord from putting the finishing touches on their lives.  They allow the bitter disappointments, the trials they are forced to endure, and the very dilemmas of life shape their character in such a way that nothing profitable ever comes of them.  Jesus gave us a warning about looking backwards. "Remember Lot's wife.” (Luke 17:32).  She had escaped the fire and brimstone of Sodom, but failed to follow God’s instructions and lost her life.  The children of Israel, twenty years and older, lost their opportunity to enter into the promise land because of doubt and fear.
Many people get close to receiving God’s salvation and blessings, but turn back.  “Now behold, one came and said to Him, "Good Teacher, what good thing shall I do that I may have eternal life?" Jesus said to him, "If you want to be perfect, go, sell what you have and give to the poor, and you will have treasure in heaven; and come, follow Me." But when the young man heard that saying, he went away sorrowful, for he had great possessions.” (Matthew 19:16, 21-22).  “Then Agrippa said to Paul, "You almost persuade me to become a Christian." (Acts 26:28).  Both of these were “not far from the kingdom of God”, but they missed it.
If you are a Christian, but you have become discouraged, keep on working for the Lord and remember where you are headed. Your blessings could be right around the corner or down the road.  If you turn back, you will never receive them.  God honors one thing above everything else and that is faith.  “Now faith is the substance of things hoped for, the evidence of things not seen.  By faith we understand that the worlds were framed by the word of God, so that the things which are seen were not made of things which are visible….But without faith it is impossible to please Him, for he who comes to God must believe that He is, and that He is a rewarder of those who diligently seek Him.” (Hebrews 11:1,3,6).  Remember "You are not far from the kingdom of God." (Mark 12:34).
Abraham Lincoln, the 13th U.S. Presidet went bankrupt twice, three of his four sons died before the age of 18, he had a bad marriage, and was defeated in eight state and national elections before he became President.  Harland David Sanders, started franchising Kentucky Fried Chicken restaurants at age 65, using $105 from his first retirement check to fund visits to potential franchisees.  He went to over 200 restaurants before someone bought his idea.  These are examples of men that did not quit and became successful in politics and business.  Just think what we can accomplish for the Lord if we are willing to keep on going in our failures and never let money, age, or negative comments of others affect us.  Many of you may be close to accomplishing something great in your life, but you have doubts about your abilities or resources.  Paul said: “I can do all things through Christ who strengthens me.” (Philippians 4:13).
There is even a greater success than gaining wealth and fame. You can overcome sin in your life because that is why Jesus came to save you. "And she will bring forth a Son, and you shall call His name JESUS, for He will save His people from their sins." (Matthew 1:21).  He has come to make your life worth living. + “I have come that they may have life, and that they may have it more abundantly. (John 10:10). He has come to give you true joy and happiness. "These things I have spoken to you, that My joy may remain in you, and that your joy may be full.” (John 15:11).
The creator of the universe was talking to a man who was seeking his creator when “Jesus said to him, "You are not far from the kingdom of God." (Mark 12:34).  God is not far from you if you will look for Him. "Ask, and it will be given to you; seek, and you will find; knock, and it will be opened to you. "For everyone who asks receives, and he who seeks finds, and to him who knocks it will be opened. (Matthew 7:7-8).

Posted by PASTOR MARK TAYLOR at 3:51 PM No comments: