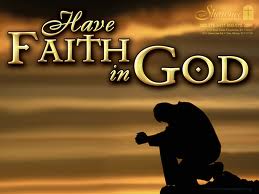 “What Faith Is And What Faith Does.” Hebrews 11:1-7
Without faith it is impossible to please Him, for he who comes to God must believe that He is, and that He is a rewarder of those who diligently seek Him.
Faith is a common denominator. Every one alive daily expresses faith in something. No one can live a single day without exercising faith – faith in the physical world. When you awoke and went into the bathroom this morning you flipped a light switch and you had faith that it would work. When you get in your car you have faith that it will start.


People who do not believe that God created the world as the Bible states, have faith in the theory of evolution.  I choose to believe God's Word when He said:  "For by Him were all things created, that are in Heaven, and that are in Earth, visible and invisible, whether they be thrones, or dominions, or principalities, or powers: all things were created by Him and for Him."  (Colossians 1:16).
To understand what faith is we must get past certain misconceptions about faith and what it is not.
What Faith Is Not

First, that faith is the ability to manipulate God. This is the approach of the “health and wealth” prosperity gospel. This approach only sees faith as having one aim – one fruit – a life of ease and blessing.
Second, that faith is adherence to a set of beliefs . You must believe the right doctrine. But Paul says in 2 Tim. 1:12, “I know whom I have believed.” If your beliefs are not founded on the right person it does not matter what else you believe.
Third, that faith is a blind leap into the dark. To many unbelievers faith is the anti-thesis of science. To these saying “you just have to have faith” is the same as saying “just have to act contrary to everything you know and trust that it will all work out for the best.”
Finally, that faith is simply devotion to whatever god one happens to follow. It can be said, “He is a person of deep faith”  What matters is that they are sincere.  But unfortunately this is not the true faith spoken of in the Bible. Hebrews chapter eleven portrays what real biblical faith looks like.  You can be sincere, but sincerely wrong, and miss God and His love for you.

What Faith Is
True faith is confident obedience to God’s word in spite of circumstances or consequences. Faith is described as:  “Now faith is the substance of things hoped for, the evidence of things not seen.” (Hebrews 11:1).  Faith is the foundation that gives the believer the confidence to love God.   Faith is having a “conviction”.  An opinion can change.  A conviction is something you will die for and not change.  This inward conviction enables the believer to believe things not yet seen and that God will perform what He has promised.
Faith Caused Abel to Worship God.  “By faith Abel offered to God a more excellent sacrifice than Cain, through which he obtained witness that he was righteous, God testifying of his gifts; and through it he being dead still speaks.” (Hebrews 11:4).  Our Lord wants our worship, love and presence.  “Oh, that men would give thanks to the LORD for His goodness, And for His wonderful works to the children of men! Let them sacrifice the sacrifices of thanksgiving, And declare His works with rejoicing.”  (Psalms 107:21-22). We do not know the details of Abel faith. We do not just how much had been revealed to Abel about how he was to worship. But his father Adam had walked with God. We do know that his faith caused him to worship God.  He chose the choicest lamb as an offering and he brought it to the place of sacrifice.
Faith Caused Enoch to Walk with God (vv. 5-6).  “By faith Enoch was taken away so that he did not see death, "and was not found, because God had taken him"; for before he was taken he had this testimony, that he pleased God. But without faith it is impossible to please Him, for he who comes to God must believe that He is, and that He is a rewarder of those who diligently seek Him.”  (Hebrews 11:5-6).


Enoch is a fascinating biblical character. Enoch lived in one of the darkest period of the history of the world. Enoch lived just before God had to destroy the earth because of man’s evil, yet Enoch managed to keep himself pure. Enoch walked with God.  The Hebrew form of the verb means he walked closely and continually with God. The walk that Enoch experienced was on of deepening intimacy with God. He lived every day in the presence of the Lord and in constant communion with Him. His faith and his obedience, as well as his worship, were outstanding.
The hallmark of Enoch’s life was that “he pleased God.” What a wonderful description of a believer’s life. Can that be said of your life? Is God pleased with how you use your time? Is God pleased with what you read? Is God pleased with the words you speak? Is God pleased with your plans for the future? Have you even bothered to consult God with your plans?  Enoch walk of faith delivered him from the consequence of death. Will yours? This verse does not say that faith is simply one way to please God: it is the only way.

Faith Caused Noah to Work for God (v. 7). “By faith Noah, being divinely warned of things not yet seen, moved with godly fear, prepared an ark for the saving of his household, by which he condemned the world and became heir of the righteousness which is according to faith.” (Hebrews 11:7).  Noah built an Ark because he believed God.  Do your works reflect your faith? Faith will make us work. Only his steadfast belief in God kept Noah faithful for the 120 years cutting the trees and planning the construction of the Ark.  The ark was 450 feet long, 75 ft wide and 45 ft. high, that means that it was nearly one and a half times the length of a football field and more than four stories high, it could hardly be hide from the ridicule of the scoffers.  The majority of the people simply refused to believe Noah’s witness concerning the coming flood. Yet, he in faith went right on working and witnessing, building the ark and warning of the coming judgement. Then as a final act of faith, he and his family stepped into the ark and closed the door.  Noah was a man of faith and his life continually showed his faith.
When you think of the limitation in your life, you may be tempted to conclude, “God could never use me.”  But God is never limited by our limitations.  In fact, he enjoys putting His great power into ordinary people.  God loves to use people who feel they have little to offer.  We think that God only wants to use our strengths, but He also wants to use our weaknesses for His glory.  God has never been impressed with strength or self-sufficiency.  In fact, He is drawn to people who are weak and admit it. This is what faith is - to worship God, to walk with God,  and to work for God.  He wants to have a relationship with you and to fulfill His purpose in your life with the gifts and abilities He has given you.
Posted by PASTOR MARK TAYLOR at 2:31 AM No comments: