PALM SUNDAY - BEHOLD YOUR KING COMES TO YOU 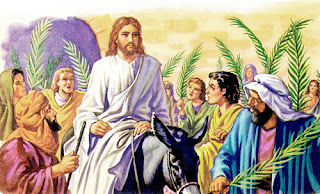 “And a very great multitude spread their clothes on the road; others cut down branches from the trees and spread them on the road.  Then the multitudes who went before and those who followed cried out, saying:“Hosanna to the Son of David!
‘Blessed is He who comes in the name of the Lord!’  Hosanna in the highest!” (Matthew 21: 8-9)

Palm Sunday, in the Christian calendar is the Sunday before Easter and the first day of the Holy Week.  The account of Christ’s entry into Jerusalem is one of the few events that are recorded in all four Gospels.  Of the four reports given in the Gospels, only one, John, mentions palms. It has been the custom of all of the kingdoms of the Middle East to cover, in some manner, the pathway of royalty.

It was a prophecy predicted in Zechariah 9:9 “Rejoice greatly; O daughter of Zion; shout, O daughter of Jerusalem; behold, thy King comes unto you: He is just, and having salvation; lowly and riding a donkey, and upon a colt of the foal of an donkey”.  It was fulfilled in Matthew 21: 1-11.  This chapter begins that which is called the passion-week. He had said to his disciples more than once, Behold, we go up to Jerusalem, and there the Son of man must be betrayed. Our Lord did a lot of good work on His way up to Jerusalem.   This passage of Christ's riding in triumph into Jerusalem, happened five days before his death.

The Passover was on the fourteenth day of the month, and this was the tenth; on which day the law appointed that the paschal lamb should be taken up (Exod. xii. 3), and set apart for that service; on that day therefore Christ our Passover, who was to be sacrificed for us, was publicly shown. This was the prelude to His passion, His death, and His Resurrection.

Palm Sunday pictures the peace-loving King who is going into Jerusalem to die to restore relationships torn by sin by establishing a new covenant in His blood.  In Revelation 19:11 there is the picture of the “King of Kings and Lord of Lords” to come and destroy His enemies, Satan, and sin.

There are many applications we can draw from this event.  God uses simple material things like donkeys, to accomplish His purposes.  He said: “The Lord has need of them” (Matthew 21:3). The Lord would like to use you to meet a need in other’s lives.   He also used their cloaks to give Him the red carpet treatment.  Some offered Him their shouts of praise and worship.

God uses what we have to glorify Him.  Don’t ever think you have nothing to offer the “King of Kings”.  “The sacrifices of God are a broken spirit; a broken and a contrite heart, O God, You will not despise” (Psalms 51:17).

The poor offered Him praise and worship.  “And when He had come near, even now at the descent of the Mount of Olives, all the multitude of the disciples began to rejoice and praise God with a loud voice for all the mighty works which they had seen, saying, Blessed is the King coming in the name of the Lord! Peace in Heaven and glory in the highest! (Luke 19:37-38)

Jesus was aware that although the common people received Him, the religious leaders did not.
Palm Sunday and Easter are illustrations about your worship of the “King of Kings” and your coming to the foot of the Cross.

Jesus could have marshaled the forces of nature to pound the minds of the masses into submission or taken over my creating a military force, or creating circumstances that would literally force people to follow Him.  But God wanted

our relationship with Him to be personal.  Everything He did was for us to find the purpose of His love and grace.  Christ is God and can be everywhere at the same time, doing trillions of things at the same time, touching trillions of hearts at the same time.  He can do all of this in an individualized, customized, totally personalized, one-on-one way.  Most people consider Christ a great historical figure, but they have no personal relationship with Him.  God, Christ, and the Holy Spirit are about you.  Christ knew you before you were born, yet he suffered and died, and rose again so you could be apart of His Kingdom.

There is a deep emotional work involved in getting to a full relationship with Christ. Let Him be your “King of Kings, and Lord of Lords” today, and He will give you an unexplainable supernatural experience.  It is called being born again, saved, receiving eternal life, becoming a friend of Christ, and a child of the King!  He is coming again.  I hope you will offer your material things, your praises, and your lives to Him this Palm Sunday.
Posted by PASTOR MARK TAYLOR at 3:31 PM No comments: