Today is the First Sunday of Advent.  Celebrating Advent involves spending time in spiritual preparation for the coming of Jesus Christ at Christmas.  We celebrate Advent not only by thanking God for Christ’s first coming, but also for His presence among us today through the Holy Spirit, and in preparation and anticipation of His Second Coming.

Christ can deliver a holiday to your home that never fades away. One that doesn’t get boxed up and stored away for another year. But rather, one that applies the healing to your life directly in the places where you hurt. One that sets you free.

In Isaiah 61:1-3, which was written sometime before 681 B.C., the prophet foresees this Messiah and speaks for Him…The Spirit of the Sovereign Lord is upon someone?
And someone has been anointed to do some things?  And that SOMEONE is Jesus Christ, our Lord and Savior.

In Luke 4: 16-21 Jesus reads from Isaiah 61! The words of the Messiah.
He tells them, What you’ve been waiting for is here! The Scripture has come true before your very eyes!”.  This is what He came to do the first time and what He will complete at His Second Coming.

1 The Spirit of the Sovereign LORD is on Me, because the LORD has anointed Me
to preach good news to the poor. He has sent Me to bind up the brokenhearted,
to proclaim freedom for the captives and release from darkness for the prisoners,
2 to proclaim the year of the LORD’S favor and the day of vengeance of our God,
to comfort all who mourn, 3 and provide for those who grieve in Zion—
to bestow on them a crown of beauty instead of ashes, the oil of gladness
instead of mourning, and a garment of praise instead of a spirit of despair.
They will be called oaks of righteousness, a planting of the LORD for the display of His splendor.

The emphasis of this message from the Lord is “to bestow on them a crown of beauty instead of ashes.”  The Jews knew that during times of mourning ashes were smeared on the head. Jesus replaces those ashes with a crown. A crown of beauty applies to the head. The cure given directly to the place of need. To bring the new life of gladness instead of mourning – the infusion of a heart of praise to replace despair and depression. Many of you here have received that crown of beauty replacing your ashes, and you know how desperately you needed it.

The Lord promised ‘beauty for ashes.’  What are ashes? They are nothing more than the remains of something that once was. Many of you are now looking back at ‘what used to be,’ and you are wishing it could be that way again. You’ve lost something or someone that  ‘used to be’ and are wishing you could have that person or thing once again.   You are grieving your past; grieving past relationships; grieving past memories; grieving past moments of blessing and are dreaming of ‘what used to be!”
Your past relationships have failed – they are nothing more than ashes it seems – but God has promised beauty! He has promised to replace your ashes for beauty!  Look at these ashes {sift through the ash heap}. Notice these ashes are nothing more than a remnant of something that once was. It’s dark and gray. It’s lifeless. It’s dirty; filthy. But, today, God will bring that thing back to life once again! He will revive what used to be to become what He expects it to be!

The Bible says that he will give us beauty for ashes. In Bible times it was the custom for the people of that day, in great times of mourning and difficulty, to lay in ashes. Just think about that. You’ve got a problem in your life and you just sit down in a pile of ashes. There is nothing beautiful about ashes.

But the scripture says he is going to take your difficult, disgusting, depressing and horrible situation and give you beauty. He is going to pick you up out of the ash pile of life and make something beautiful out of you.

Isaiah said he will give you beauty for ashes. God knew you would be burnt by life’s experiences. But he also knew he could replace that burnt out mess wi

Whatever God’s hands touch becomes beautiful. All you need is a touch from the master’s hand.  He has made every thing beautiful in His time. (Ecclesiastes 3:11)

Our Lord does not want you to worry about your future or how you are going to make it through your difficult days.  Listen to God’s Words to you today:

Fear not: for I have redeemed thee, I have called you by your name; You are Mine.
When you pass through the deep waters, I will be with you; and through the rivers, they shall not overflow you: when you walk through the fire, you shall not be burned; neither shall the flame stay upon you.  For I am the LORD thy God, the Holy One of Israel, Your Savior.  Isaiah 43:1-7

Let us begin this Christmas season by thinking about what the Lord Jesus has already done for us and what He is going to do for us in the future.  Allow Him to begin the process of turning your ashes into a crown of beauty on your head.  Others will be able to see this crown and you will glorify your Father who is in Heaven.

Posted by PASTOR MARK TAYLOR at 11:51 AM No comments:

THE PARABLE OF THE LOVING FATHER 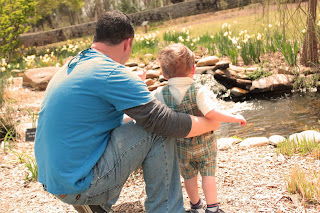 We live in a world of ungrace.  God’s grace is often hard for us to fathom, and so Jesus talked to us about it often.

Although this is often called the parable of the Prodigal Son, the key figure in the parable is the Father. I prefer to call it the Parable of the Loving Father. Jesus is teaching us the God of the Universe is like the father in this story. It’s not enough to believe in God; you must understand the nature of the God Jesus came to introduce. The wonder and beauty of the character of God can been easily seen in this beautiful parable.

Chapter 15 begins with this: “Now the tax collectors and ‘sinners’ were all gathering around to hear him. But the Pharisees and the teachers of the law muttered, ‘This man welcomes sinners and eats with them.’”
This is what prompts Jesus to tell three parables that highlight God’s extreme grace--the Pharisees’ extreme ungrace.
In essence, Jesus is saying, “You think you know God, but you do not. God doesn’t play by your rules. Here is what God is all about.”
In the parable, the father represents God the Father.
And this father had two sons.
One of these boys is called the ‘older’ and the other is called the ‘younger’.

The story of the Prodigal Son, after all, appears in a string of three stories by Jesus—the lost sheep, the lost coin, the lost son—all of which seem to make the same point. Each underscores the loser’s sense of loss, tells of the thrill of discovery, and ends with a scene of jubilation.
Jesus says in effect, ‘Do you want to know what it feels like to be God? When one of those two-legged humans pays attention to Me, it feels like I just reclaimed My most valuable possession, which I had given up for lost.’”

In Luke, right before the parable of the Prodigal Son, Jesus says in verse 10: “In the same way, I tell you, there is rejoicing in the presence of the angels of God over one sinner who repents.”

The God of the Universe has a message for you today. He is saying to you, “I love you, so you are free to go.” God loves you so much He will never force you to stay in fellowship with Him. So, if you are bound and determined to do something as foolish as walking out on God, He won’t stop you.
Remember, God doesn’t play by our rules.  Who do we know who might feel too embarrassed to come back home…to return to church?

Starting in verse 17 we get to see a real turning point in this parable.

“When he came to his senses, he said, ‘How many of my father’s hired men have food to spare, and here I am starving to death! I will set out and go back to my father and say to him: Father, I have sinned against heaven and against you. I am no longer worthy to be called your son; make me like one of your hired men.’  So he got up and went to his father.”

Look at what Paul says to the Christians in Ephesians Chapter 2: “As for you, you were dead in your transgressions and sins, in which you used to live when you followed the ways of this world…All of us also lived among them at one time…But because of his great love for us, God, who is rich in mercy, made us alive with Christ even when we were dead…it is by grace you have been saved.”

Our God is loving Father, Who does not hold our sins against us, but throws a party when we come to Him for salvation and forgiveness!  And while we are still a long way off, he runs to us!  “When you start home, I’ll meet you more than halfway!”

The father refused to entertain the idea his son would be a servant. You see, even when the son was in the far country, the relationship was intact; it was the fellowship that was broken. Immediately the father commanded his servants to bring the best robe. He took that beautiful robe and lovingly placed it around his son, covering all the filth and dirt of his mistakes. That’s a lovely picture of how God covers our sin with a robe of righteousness.

So where are we in this parable?  Are we inside the party celebrating?  Or are we standing outside
Posted by PASTOR MARK TAYLOR at 4:57 AM No comments: