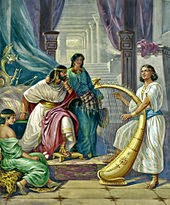 DAVID AND SAUL
(I AND 2 SAMUEL)

The story starts out with Saul – chosen by God to fulfill the people’s desire to have a king like all the other nations.   Saul was anointed King of Israel by popular acclaim, though at God’s direction. He was a man of stature, taller than all his peers, an apt warrior king. Just the sort of man Israel needed to oppose the Philistines. Except that he was also a flawed king.

He forgot where his power as King came from and so made one too many mistakes as far as obeying God was concerned. As time and circumstances went on, Saul began to show his weaknesses. He often went by his own agenda and didn’t fully seek the Lord’s direction. He had trouble waiting for the Lord’s timing, too. Saul began to put himself above the Lord and made decrees without the Lord’s counsel.   As a result God decided to turn the kingship over to another, to David, a man after God’s own heart.

King Saul was requested by the people because they wanted to be like the nations around them.  “We want to be like the nations around us. Our king will judge us and lead us into battle.” To be similar to other nations, they needed to have a king and not considered or noticed GOD is KING of kings and LORD of lords and their protection. GOD is more than enough. “But though I have rescued you from your misery and distress, you have rejected your God today and have said, ‘No, we want a king instead!’”  1 Samuel 10:19

God does not want us to be like the world.  Just because everyone else feels that they can sin and get away with it, God is watching.  There are consequences for sin and getting what you want when it is not God’s will.  God wanted to bless Saul and the nation of Israel, but Saul became proud and wanted to do things “his way”, and not "God’s way" . If a person rejects God, God will give His blessings to someone else.

After Saul’s failure, God allowed Israel to have another king.  King David was chosen after GOD's own heart, after GOD's own thoughts and feelings.   David had been anointed some time before, but had to wait 15 or 20 years for Saul to die before receiving the promised kingdom.  Samuel picked David, the youngest of Jesse’s boys, and anointed him as the next king. 1 Sam 16 says, From that day on the Spirit of the LORD came upon David in power.

David is rightly described as a man after God’s own heart. For him, personal ambition was secondary. What mattered most was God’s right to choose, God’s right to dispose of his people as he saw fit. And when God anointed someone as King, only God had the right to take away that position.

Two men remained in the palace. And one had a spear in his hand, but the other, a harp. Nobody tried to kill Saul, but he was always nervous with the fearful thought that somebody would harm him. Because he thought his son had made a covenant with David to kill him, he sought to destroy David. In the course of seeking David, he slaughtered 80 priests of God. So, when he was under the urgent circumstance, he could not go to the priests to inquire of the Lord. Instead, he asked a medium.

How can I have a heart like David’s rather than like Saul’s? Let’s learn what the Holy Spirit does as He works in our hearts through Baptism and God’s promises.  The Lord’s not fooled by outward appearance and The Lord’s Spirit changes us to the core.

The heart, the way the Bible uses that word, focuses on the mind as well as the emotions.  The heart is the real you, the inner you. It’s your thoughts and mind, your feelings and emotion, your will and drive. It’s the full you, the real you.

"From that day on the Spirit of the LORD came upon David in power" (1 Samuel 16:13 NIV). The Holy Spirit changes us at the core. He changes hearts. Consider some of the effects the Holy Spirit worked in the life of David. When faced with the hostile giant Goliath, David declared to him, "You come against me with sword and spear and javelin, but I come against you in the name of the LORD Almighty, the God of the armies of Israel, whom you have defied"(1 Samuel 17:45 NIV). He trusted in the Lord.

If you want the Spirit, use the word. If you want to be David and not Saul, use the word. A good place to go in the Scriptures is to the Psalms. God used David to write many of them. The Holy Spirit will use them to work trust in your heart. For through the word the Holy Spirit changes us to the core so that we do much more than simply an outward practice of Christianity.

He changes our hearts, the real you, the inner you, your thoughts, mind, emotions, attitude, will, and drive. God knows your heart. He knows how to keep you trusting his promises. No matter what Goliath you face, no matter how bleak the future may seem, no matter how horrible the sin that torments you.

That’s the change the Holy Spirit works in you and me. He plants trust in the Lord and grows that trust. But just as a farmer doesn’t just wave his hand and have his fields planted and growing, so also the Holy Spirit uses tools. For you see, through his tools the Holy Spirit brings us God’s promises, and his promise create trust.

God is looking for men and women, young people, and children who will follow Him.  He will give them all the resources they need.  He will give them blessings and success.  It all starts with trusting God and having a heart that God can speak to.  Will you be a David today instead of a Saul?

Posted by PASTOR MARK TAYLOR at 6:57 PM No comments: