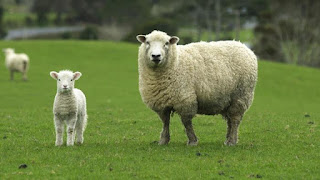 TWENTY THIRD PSALMS – VERSES 1-2
“THE LORD IS MY SHEPHERD”

When a shepherd bought a sheep, he was given a distinctive earmark which he cuts into one or other of the ears of his sheep.  The sheep always would bear the mark of the shepherd.  "I am the door. If anyone enters by Me, he will be saved, and will go in and out and find pasture. "The thief does not come except to steal, and to kill, and to destroy. I have come that they may have life, and that they may have it more abundantly. "I am the good shepherd. The good shepherd gives His life for the sheep. "But a hireling, he who is not the shepherd, one who does not own the sheep, sees the wolf coming and leaves the sheep and flees; and the wolf catches the sheep and scatters them.” (John 10:9-12)The shepherd knows his sheep and the sheep know their shepherd.  You have a great Shepherd.  "My sheep hear My voice, and I know them, and they follow Me. "And I give them eternal life, and they shall never perish; neither shall anyone snatch them out of My hand. "My Father, who has given them to Me, is greater than all; and no one is able to snatch them out of My Father's hand. "I and My Father are one." (John 10:27-30)

“I SHALL NOT WANT”

Contentment should be the hallmark of the man or woman who has put his or her affairs in the hands of God.  Jesus is the owner who delights in His flock.  For Him, there is no greater reward, no deeper satisfaction, than that of seeing His sheep contented, well fed, safe, and flourishing under His care. “I am the good shepherd: the good shepherd gives his life for the sheep” (John 10:11).  “I am come that they might have life, and that they might have it more abundantly” (John 10:10).  “Now godliness with contentment is great gain. For we brought nothing into this world, and it is certain we can carry nothing out. And having food and clothing, with these we shall be content.” (1 Timothy 6:6-8)

“HE MAKETH ME TO LIE DOWN IN GREEN PASTURES”

The only time sheep will lie down is if four requirements are met.  They will not lie down unless they are free from all fear, they are free from friction with others of their kind, they are free from flies or other pests; and free from hunger.  Christ can meet all of these requirements in our lives.  “For God has not given us the spirit of fear, but of power, and of love, and of a sound mind” (2 Timothy 1:7).  Sheep like people are constantly in conflict, and jealousy within the flock can be a detrimental thing.  But when the shepherd is present, the sheep quickly forget their rivalries and stop fighting.  When your eyes are on the Master, they are not on those around you.  “"But the very hairs of your head are all numbered. Do not fear therefore; you are of more value than many sparrows. (Luke 12:7 )
The shepherd gives his sheep freedom from fear from the torment of parasites.  He applies various types of insect repellents to his sheep mixed with oil.  This is one of the main functions of the gracious Holy Spirit.  He is often symbolized by oil. It brings healing, comfort, and relief from the harsh and abrasive aspects of life.  “There is no fear in love; but perfect love casts out fear, because fear involves torment. But he who fears has not been made perfect in love.” (1 John 4:18)

The shepherd plants the green pastures with much toil and skill.  The Good Shepherd has supplied green pastures for those who care to move in onto them and there find peace and plenty. “For by grace you have been saved through faith, and that not of yourselves; it is the gift of God, not of works, lest anyone should boast. For we are His workmanship, created in Christ Jesus for good works, which God prepared beforehand that we should walk in them.” (Ephesians 2:8-10 NKJV)  “Follow after righteousness, godliness, faith, love, patience, meekness. (1 Timothy 6:11).

In studying this Psalm it must always be remembered that it is a sheep in the Good Shepherd’s care who is speaking.  It could be assumed that anyone in the Good Shepherd’s care could never become so distressed in their soul as to need restoration, but it does happen.  In Psalm 42:11 David cries out, “Why are you cast down, O my soul?  And why are you disquieted within me?  Hope thou in God”.

Cast down is an old English shepherd’s term for a sheep that has turned over on its back and cannot get up again by itself.  A “cast” sheep is a very pathetic sight.  Lying on its back, its feet in the air, struggling to stand up without success.  If the owner does not arrive on the scene within a reasonably short time, the sheep will die.  In the Christian life there is an exciting and comforting parallel here.  Many people have the idea that when a child of God falls, when he is frustrated and helpless in a spiritual dilemma, God becomes disgusted, fed up and even furious with him.  This simply is not so.  In examining our Lord Jesus Christ we see Him again and again as the Good Shepherd picking up “cast” sheep.  The tenderness, the love, the patience that He used to restore Peter’s soul after the terrible tragedy of his temptation and denial is a classic picture of Christ coming to restore one of His own.Christians, like sheep, can become cast down when we think “we have it made”, and walk away from the sheep fold.  Sometimes it is because of self-indulgence and moving away from the pasture where the Good Shepherd is protecting us.  Sometimes it is because, like sheep, we simply have too much wool.  Wool in Scripture depicts the old self-life in the Christian.  It is the outward expression of an inner attitude, the assertion of my own desire and hopes and aspirations.  Sometimes it is the clinging on of accumulation of things, of possessions, of worldly ideas that begin to weigh us down, drag us down, and hold us down.

Remember, it is the Good Shepherd that comes and finds us and restores us.  But he also gives us this command:  “Brethren, If a person be overtaken in a fault, you which are spiritual, restore such an one in the spirit of meekness; considering yourself, lest you also be tempted.  Bear you one another’s burdens, and so fulfill the law of Christ” (Galatians 6:1-2).
“He leads me in the paths of righteousness for His name’s sake”

Sheep are notorious creatures of habit.  If left to themselves they will follow the same trails until they become ruts; graze the same hills until they turn to desert wastes, pollute their own ground until it is corrupt with disease and parasites. King David wrote this Psalm because he knew through firsthand experience, that if the flock was to flourish and the owner’s reputation was to be held in high esteem, the sheep had to be kept on the move.  They must be shifted from pasture to pasture periodically.  A pattern of grazing is worked out carefully in advance so that the sheep do not feed over the same ground too long or too frequently.

“All we like sheep have gone astray” (Isaiah 53:6).  We prefer to follow our own desires and turn to our own ways.  And this we do deliberately, repeatedly even to our own hurt.  We insist we know what is best for us even though the disastrous results may be self-evident.  Just as sheep will blindly and habitually follow one another along the same little trails, so we humans cling to the same habits that we have seen ruin other lives.  “There is a way that seems right unto a man, but the end thereof are the ways of death” (Proverbs 16:25).  The point is that many of us do not want to be led in the paths of righteousness, we actually prefer to turn to our own way even though it may take us straight into trouble.
Jesus said: “Whosoever will come after me, let him deny himself, and take up his cross, and follow me” (Mark 8:34).  This is the pivot point on which a Christian either “goes on” with God or at which point he “goes back” from following on.

New attitudes have to be acquired to be led “in the path of righteousness”.  Instead of loving myself most I am willing to love Christ best and others more than myself.  Instead of insisting on my rights, I am willing to forego them in favor of others.  Instead of finding fault with life and always asking “Why?”, I am wiling to accept every circumstance of life in an attitude of gratitude.

Posted by PASTOR MARK TAYLOR at 5:43 AM No comments: