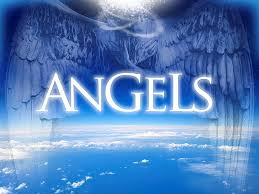 “Be not forgetful to be good to strangers; for thereby some have been unaware they have entertained angels.”  Hebrews 13:2 “

It is comforting to know that God has specific angels assigned to help us. We know this is true because of something Jesus said when the Lord was talking about little children:   "Take heed that you do not despise one of these little ones, for I say to you that in heaven their angels always see the face of My Father who is in heaven. For the Son of Man has come to save that which was lost." (Matthew 8:10-11)

As strong and as powerful as the angels are, they cannot begin to compare to Jesus. Our crucified and risen Savior is Lord of all! He is far, far above all of the angels.  Jesus is greater than the angels. Jesus is Lord of all! And He is certainly Lord over all the angels.  “After He (Jesus) finished the sacrifice for sins, the Son took His honored place high in the heavens right alongside God, far higher than any angel in rank and rule. Did God ever say to an angel, “You’re my Son; today I celebrate you” or “I’m his Father, he’s my Son”? When He presents His honored Son to the world, He says, “All angels must worship Him.” (Hebrews 1: 3-6 The Message).

We need to realize that there are good angels and bad angels.  it is clear from (Revelation 12:7) and many other passages, the leader of these fallen angels (or demons as they are also called) is Satan (Matt. 12:25-27).  There was a rebellion by Satan in Heaven (a fallen angel), who, being lifted up by his own beauty, sought to exalt himself above God and rebelled (Isaiah 14:12-14). In his rebellion, he took with him one-third of the angels (Rev. 12:4). Satan, the leader of unholy angels, is a liar, a murderer, and a thief (John 10:10).

But I don’t want to spend time writing about the bad Angels, but the Good Angels.  The book of Hebrews calls angels "ministering spirits sent to serve those who will inherit salvation" (Heb. 1:14). Angels minister to us in many ways, and I'd like for us to look at some of their ministries.

It is comforting to know that God may send us angels to protect, encourage, and guide us. Praise the Lord for His angels and for all the work they do for Him.

Angels care for and protect believers from physical harm and give believers strength to overcome difficulties.  This world is a dangerous place, and angels can provide supernatural protection. (Daniel 6) tells the story of how an angel shut the mouths of the lions when Daniel was thrown into their den.  Psalm 91 gives us encouragement of God’s protection over us.  “For He shall give His angels charge over you, to keep you in all your ways.  They shall bear you up in their hands, lest you dash your foot against a stone.” (Psalm 91:11-12).  This is not saying we will never break a leg or arm, but in dangerous situations we can pray for God’s protection and remind God of this promise.

Angels strengthened Jesus after His temptation (Matt 4:11). They encouraged the apostles to keep preaching after releasing them from prison (Acts 5:19-20), and told Paul that everyone on his ship would survive the impending shipwreck (Acts 27:23-25). Angels encourage.  Not only can God send us brothers and sisters in Christ to encourage us, He can also send us His messengers.

Sometimes, angels give guidance so God's people will know what He wants us to do. An angel appeared to Joseph in a dream and instructed him to take Mary as his wife and to name her baby Jesus (Matthew 1:20-21).  And it was an angel who told Philip where to go in his travels so that he could meet the Ethiopian eunuch and lead him to Christ (Acts 8:26).   Since we now have the completed canon of Scripture, God may not send His angels to deliver messages as often as He did in the Bible times, however, it is possible.

The ministry of holy angels will never contradict the Bible.  The actions of holy angels will always be consistent with the character of Christ.  A genuine encounter with a holy angel will glorify God, not the angel. Holy angels never draw attention to themselves. They typically do their work and disappear.

We need to be extremely carefully not to buy into the world's perspective on angels. Our secular society presents many false views and ideas about God's messengers.  We should not pray to angels or try to contact them.  If we need help or assistance, we should pray to God, for He is the one we should talk to, not angels.  We have the Holy Spirit to teach us and lead us.  “For the Holy Ghost shall teach you.” (Luke 12:12) and Jesus said:  “But the comforter, which is the Holy Ghost, whom the Father will send in My Name, He shall teach you all things, and bring all things to your remembrance, whatsoever I have said unto you.”  (John 14:26).

Angels are just another resource from Heaven that God can use to show His love for us.  It is a wonderful thing to be a child of God and be under His protection, His encouragement, and His guidance.

Posted by PASTOR MARK TAYLOR at 5:31 PM No comments: