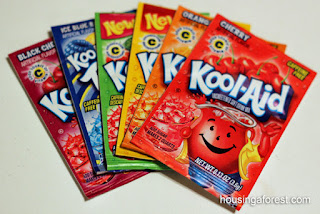 There is a path before each person that seems right, but it ends in death.
Proverbs 14:12

There are many different flavors of Kool-Aid and while some of us may have our favorites, others may drink whatever Kool-Aid is put in front of them.  In our world today, there are many flavors for us to choose from and as a matter of fact, we are told that we should be accepting of all the various influences out there and if we don’t then we are seen as arrogant and exclusive.  Unfortunately, the Christian point of view is being silenced by those who are preaching inclusiveness and acceptance of various points of view and various lifestyles.

The church is being out argued and out publicized and many Christians are bowing down out of fear and “drinking the Kool-Aid” of the world by accepting those things which are not Biblical.  Many Christians hope that they won’t be seen as bigots or having some sort of phobia of those who choose to live their lives in contradiction to the Bible and are willing to bend the Word of God to fit what they think is right.  The biggest and worst twist that I’ve seen is that we should all be loving and accepting of everyone no matter what they choose to do because if we don’t then we are labeled as “haters.”

The problem is exactly what the verse above says, there is a path that SEEMS right but it leads to death.  This path is a dead end literally and not the one that we should choose to travel on.  The path that many people choose is the “path of least resistance” because it’s easy.  We don’t want hardships, we don’t want arguments, we don’t want anything that is going to make us have to stand up and actually defend the faith that we claim to have.  We adopt the mindset of “live and let live.”  Don’t get me wrong here, I am not saying that we should actively go out and seek someone to argue with, but instead be prepared to stand for what is right based on God’s Word, not what seems right at the moment or the easy path.

When I was a teenager, it was a popular thing to go to a restaurant and go to the soda machine and fill up your cup with all the different drinks and mix them together.  Interestingly, we called this a suicide which is what happens to our faith when we begin mixing ideas of humans with the Bible.  It is a dangerous thing to start mixing right and wrong, darkness and light.  The prophet Isaiah said, “what sorrow for those who say evil is good and good is evil, that dark is light and light is dark, that sweet is bitter and bitter is sweet.”  Our world today is experiencing a great amount of confusion and the simple reason is because we have quit relying on God’s Word and relying on whatever the world wants us to do and say.  Political correctness is very popular right now but I would remind you that Jesus was not politically correct as He challenged many of the customs and ideologies of the day when He walked this earth.

Many people want us to think that Jesus was very accepting of all lifestyles but they forget that He told the woman at the well to “go and sin no more.”  Jesus didn’t tell this woman that she was free to do what she wanted because it was a good source of income for her, He forgave her sin but He told her to leave that life behind.  Jesus condemned her sin, He didn’t condone it.  God told Moses, “I AM THAT I AM,” not “I am what you want me to be,” or “I am whatever you think I am.”  God was saying that He is the one and only, the original, cannot be duplicated, all knowing, all powerful God of this world and we must have a relationship with Him on His terms and not ours.   Jesus said, “I am the way, the truth, and the life” and “no man comes to the Father except by me.”  Jesus didn’t say He was one of many ways or that there were other ways to make it to Heaven, He said He was the one and only way.  Contrary to popular belief, not all roads lead to Heaven.

The path that Jesus walked up the hill to Calvary was paved with our sin but He chose to walk it so that we could be free from sin and death.  If there was no such thing as sin then there would have been no need for Jesus to do what He did. Since Jesus made this difficult walk, He can help you make it too.  Don’t get caught up drinking the Kool-Aid of the world, no matter what flavor they are serving.

Posted by PASTOR MARK TAYLOR at 1:37 PM No comments: